Use a GVRVolumeLoad-Module to load a .gvr-File (such as the one created with the network above). “GigaVolume” is the preferred file format of MeVisLab, since it incorporated the full dataset in multiple resolutions as part of an octree (see here for more details) and makes calculations easy… 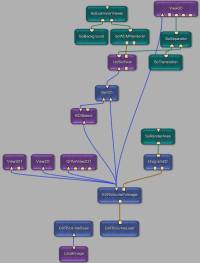 It's probaly easiest if you recreate the network on the right (Click on Thumbnail to see it better!). If you're lazy, you can download the file here: isosurface.mlab

put file-dimension into the name of the saved file 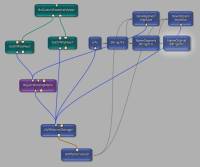 easiest way to add the size of the images into the saved filename1) is to use an info-module to get the size of the data, concatenate this info into a string with “StringUtils” and add a descriptor with another “StringUtils”. This string can then be used with the postfix-field of the “ImgSave”-module.

An exemplary network for your perusal is shown on the right and can be downloaded here: filenameinfo.mlab.

The simples way to generate a movie of e.g. a rotation your visualization is to use the internal movie-possibilities of MeVisLab.

First, generate your network, and use a SoCustomExaminerViewer or SoExaminerViewer for visualizing your result (see image below or use the premade network movie.mlab) 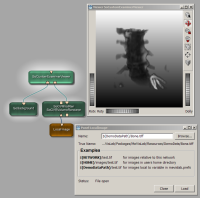 On the “Rotation”-tab, you can set the Rotation Steps and Angles. Don't forget to turn on “Record Rotation”! With this, MeVisLab will record how your visualization looks while it's rotating (see left image below). When the rotation is finished, change to the “Movie”-tab and press “Record Movie” (see central image below). Another sheet should open and you should be able to save the movie or the movie stills. I'm generally using the ScreenshotGallery, which is set to be my Desktop (use the preferences of MeVisLab to set it to a directory of your choice), but you can set any directory of your choice (see right image below). 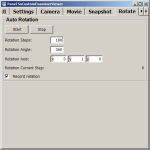 I've had only bad luck with using the “Create Video” option in the “Movie Creation Box”2). So I'm usign the “Do not create movie…” option and save the still images to my harddisk. Afterwards, some ImageMagick-Skills along the lines of

should do the trick of creating a movie out of your still files.

I'm generally using QuickTime Player Pro to generate a movie since I'm presenting with Keynote, but the process from Still images to a movie should be fairly easy with any choice of program you prefer…

If it's not shown directly, you can download the movie as movie.mpg here (444 KB)

how to convert a stack of files into .GVR